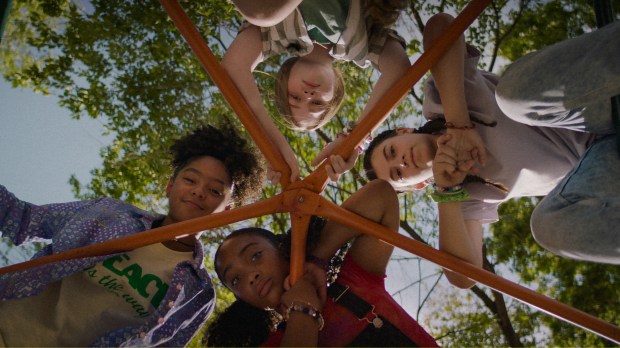 Click here to listen to the interview with James Ponsoldt.

SUMMERING artfully combines the mundane with magical realism as four 11-year-old girls face summer’s end and the daunting prospect of middle school. Using the device of a dead body to ground the emotional journey of his protagonists, filmmaker James Ponsoldt has applied the same mythic consideration to this rite of passage that has previously only found a masculine voice, from STAND BY ME, RIVER’S EDGE, and even, heaven help us, WEEKEND AT BERNIE’S.

The four are lifelong friends, but could not be more different. Mari (Eden Grace Redfield) has a chipper but anxious helicopter mother (Megan Mullally) tracking her via an app on her cell phone. Physically the smallest of the four, she is also the one who worries that she will be left behind by the others when she leaves the public school system to attend Catholic school. Daisy (Lia Barnett) is barely coping with the disappearance of her father and the silence about it from her mother (Lake Bell), who has abrogated her responsibilities in favor drinking herself to sleep in front of the television. Lola (Sanai Victoria) has a nurturing single mother with a mystical bent who finds it harder and harder to connect on a meaningful level with her only child. Dina, (Madalen Mills), blessed with a boisterous family who want too much of her time, is the group’s proto-mean girl and intellectual who is losing patience with Lola’s wholistic worldview, and more intimidated than she would like to admit by the dire predictions about how awful the next few school years will be cheerfully offered up by her older sister.

On the last Friday of summer, they discover a dead body near the shrine made of childhood mementos that they have constructed in the woods near their small town. Curious about who this man might have been, and fueled by crime dramas in which it is usually a woman who has been killed, they decide to keep the discovery to themselves until they can investigate the corpse’s identity. It may not be the logic of adulthood, but the certainty that the police, not to mention their mothers, will have a million questions about how they found him, coupled with dealing with mothers convinced that their daughters have been traumatized, convince them to spend the last Saturday of summer discovering the truth.

As they follow clues, images of the dead man appear to each of them (or is it their own gnawing fears about the future), culminating in a seance that proves stunningly effective in laying the dead man to rest (metaphorically) and providing a resolution of sorts to the relationships the girls have with their mothers. Perhaps détènte is a better word. Grammar school is over, but the brave new world of adolescence and puberty awaits, as we are reminded in a poetic scene towards the end as Daisy marvels at a murmuration in the early morning sky, and the sight of boys riding by her house on bicycles.

Ponsoldt, in taking us on this trip into the secret world of pre-adolescent girls, has cleverly limited the intrusion of the male of the species. Even the bar into which the girls wander during their investigation is peopled by staffed and patronized by women doing their day-drinking without sport blaring in the background, but with the same alcohol addled bonhomie found among male day-drinkers. The journey has its metaphorical aspects (visiting their empty old school in order to delve into the dark web), but it’s also firmly set in the reality of time slipping away, and of the shiny gloss of being a grown-up becoming tarnished.

The dialogue has richness of purpose, both in subtly revealing the girls’ inner lives and outer frustrations, but it is never arch nor studied. Rather, it is scrupulously natural in form and, thanks to performances by the quartet that feel spontaneous and absolutely authentic. They may quarrel, they may disagree, but the bond they share is palpable. As a celebration of friendship in general, and that of girls in particular, it is magnificent, leaving their mothers, as they look on, to mourn that they’ve lost the knack for it.

SUMMERING is funny, sweet, poignant, and heartbreaking. Most of all, though, it respects its heroines, imbuing their quest in the tellingly named town of Midwood with the mystique of the heroine’s journey out of childhood.