You are here: Home / Movie Reviews / FIRE OF LOVE
Rating: 5 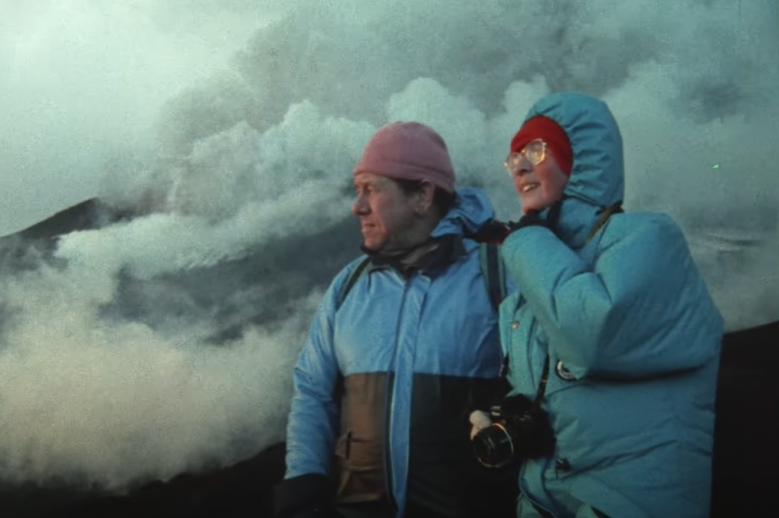 Click here to listen to the interview with Sara Dosa.

Sara Dosa wants to do more in her documentary, FIRE OF LOVE, than merely tell the story of Katia and Maurice Krafft, the intrepid volcanologists who traveled the globe studying volcanic eruptions in all their formidable splendor. Dosa does that, of course, but she also infuses her story with a dash of the mythic, honoring her subjects who came to see volcanoes in mythic terms despite being rigorous scientists. There is more here than can be explained in merely factual terms. Including, as Dosa makes a point of reminding us, just how improbable it was that these two, obsessed with volcanoes and willing to give their lives to them, literally and figuratively, just happened to exist at the same time and within 20KM of each other in Alsace-Lorraine. Was it chance or kismet?

We are told at the outset that a particular day would be the Krafft’s last, giving us fair warning about just how dangerous their calling was. It does nothing, however, to detract from the palpable sense of joy that the couple had while pursuing it even as they fully understood the risks. They are almost always smiling or laughing, their eyes alight and an infectious sense of enthusiasm and of humor in evidence. At one point we see Katia, concealed within the silver thermal suit that allowed her to venture close to eruptions, standing in front of a wall of lava and just by the way she is waving, you can sense that she is smiling. Broadly.

A study in contrasts despite their shared passion for volcanology, geochemist Katia was the sensible one. Elfin and devoted to details, she took still photographs of exacting elegance. Geologist Maurice was the risk-taker. A bear of a man dancing on the edge of a crater, he captured the grandiosity of volcanoes in moving images and dreamed of canoeing down a lava flow. He actually did float out onto a lake of acid in a rubber dinghy as Katia looked on in fury. They honeymooned on Santorini (Thera before it exploded in volcanic fury millennia ago) and refused to classify volcanoes because it was an insult to their individual personalities. (Dosa gives their favorites co-star billing).

Eventually, though, they conceded two broad categories. The red volcanoes, the friendly ones resulting from tectonic plates pulling apart, and whose incandescent lava flows lovingly captured here were slow and predictable; and the grey, the killers who explode where tectonic plates collide resulting in explosions and pyroclastic flows careening faster than the ability to outrun them. Mount St. Helens was the latter, and it was that eruption that inspired the couple to devote themselves to that kind of volcano, and to ensuring that governments took the warning signs of such an eruption seriously enough to develop emergency protocols to save lives. Images they shot of the aftermath of such an eruption that took an estimated 25,000 lives is as startling as it is grim.

Thanks to a network of contacts that they developed, who alerted them to when a volcano woke up, they could dash off to be there for the event. The resulting footage and stills make up the film, along with the words they spoke during their many media appearances, and that they wrote in the books and films they produced to support their work as freelance scientists, or, as Maurice put it, volcano runners. It is spectacular. Ropes of cooled lava burst with molten fire, and plumes of pyroclastic clouds loom half-a-mile into the atmosphere. Though not formally trained, they had a gift for capturing not just the facts, but of the sense of wonder they experienced. Dosa reflects that with carefully chosen words spoken by narrator Miranda July. It’s not just a combination of factors that make up an eruption, it’s the alchemy of those elements, to cite just one example. Dosa herself came to see the lava flows as sentient, and it is easy to see why.

Over and over again in FIRE OF LOVE, Katia and Maurice talk about the risks they are taking, and we come to understand exactly why they both were not just willing, but also eager, to take them (acid lake notwithstanding). When we see the last photograph of them at a distance, a volcano erupting as they look on, it is bittersweet to be sure. But it also seems like it’s exactly what they would have wanted as a way to say farewell. Our only regret is that the world is a lesser place without them in it to help us see the world as they did.